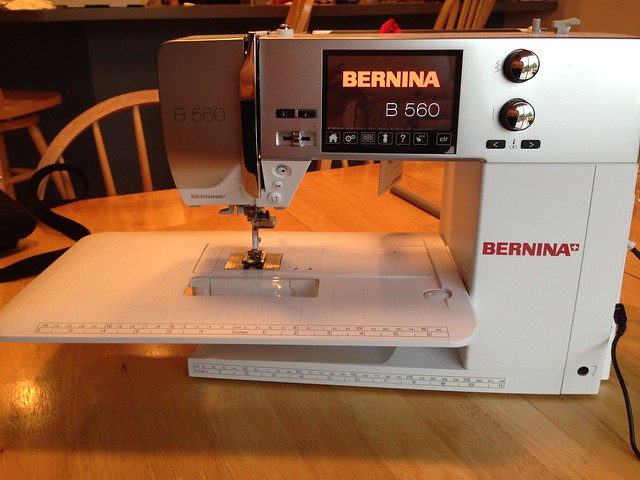 Isn’t she a beauty?

I’ve had her a couple of weeks and she doesn’t yet have a name.  You may recall that I’ve been having issues with Bunny for the past few months and despite trips to the shop, they were still occurring.  Husband told me to just suck it up and buy a new one, and down the rabbit hole I went!

I first started looking at the Bernina 350s because I was just looking to replace what I already had.  A basic, computerized machine.  I didn’t want anything super fancy, and I didn’t want a machine that does embroidery.  I also like the pretty face plates on the 350s!  So to the shop I went to check out the 350s.  While at my LQS, Sara, my trusty sales woman, asked me if I looked at the 550 & 560 and I told her I wasn’t because I’m not interested in embroidery…that I was pretty set on the 350, I was just waiting for a sale or a financing deal.

The one thing I DID like about the Bernina 5-series is the stitch regulator (BSR) that they have – I was eyeing it up, but I was certain I didn’t want an embroidery machine, so I kept shying away from them.

Long story short… The Enabler (a.k.a. Gretchen) went to her LQS (that also sells Berninas), and she test drove the 560 on my behalf.  Gretchen had just purchased a new Janome Horizon for herself, but she was window shopping for me (isn’t she nice?)  She told me something that I didn’t know….that you don’t have to purchase the embroidery ‘stuff’ (and therefore the price is much less than on the sticker on the machine!).  So that basically made the decision for me.  I was able to add the BSR at less than retail and now I’ve got myself a shiny new machine!

I think it likes me, too… 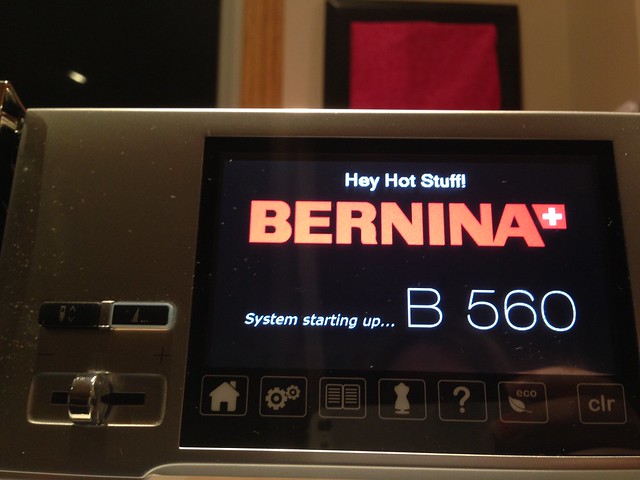 And so far we’re getting along just fine… 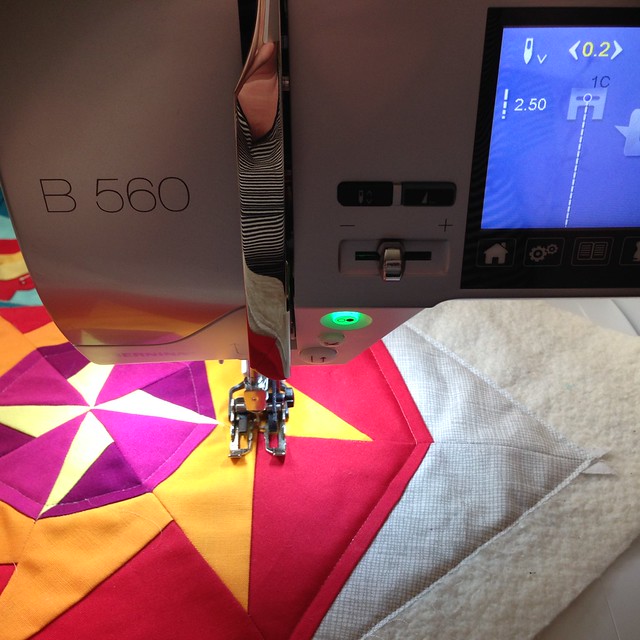 I just quilted my Lucky Stars blocks that I did at the June MN Quilt Show class I took with Gret and Elizabeth Dackson.  I used clear thread and stitched in the ditch in some places, and stitched 1/4″ from my seams in other places.  I didn’t want the quilting to take away from the fantastic paper pieced stars we made, and this was the best option for that.

I'm a wife, mom of two (one blue, one pink), and I work full time. Our family loves to camp, and we're often on mini adventures during the summer. My fall/winter/spring/rainy day hobby is quilting. I started about 10 years ago, then put everything away when The Blue One was born. A few years ago a good friend decided to take up this 'hobby' and I've been back at it ever since. She's my partner in crime (A.K.A. 'the enabler'). I have no aspirations of becoming a quilt designer - I'm just not that good at geometry (I rely on my math major/computer programmer husband to help with piecing backs at times!). This little blog is my way of chronicling my quilting adventures. Occasionally I post about non-quilting things as well. Thanks for stopping by. Don't forget to say HI! IG: wannabequilter
View all posts by msminnesota →
This entry was posted in Quilts and tagged Bernina 350, Bernina 560. Bookmark the permalink.

8 Responses to In Other News…