A few weeks ago I found a super cute winter mug rug and decided to make one for myself, and figured while I was at it, I would make one for Gretchen.  Easy enough, right?

I mentioned in an earlier post that things have been rather hectic around our house lately. The crib-notes version is that my father-in-law was diagnosed with stage 4 esophageal cancer in early October and he passed away on December 3.  In that time, we had a week-long family vacation, I had a work trip to Vegas, and two weekend getaways with girlfriends.  Basically, we were gone every-other weekend for 2.5 months, and the weekends we were home were spent trying to keep from drowning in laundry and other household chores.  You can imagine that things were a little crazy here.

During that time I decided that a quick little sewing project or two would be nice little diversions, but I was wrong!

You know how you sometimes get in the sewing ‘zone’ and just get to work?  Well, during those times, it’s important to remember to put RIGHT sides together.  THIRTY half-square triangles later… 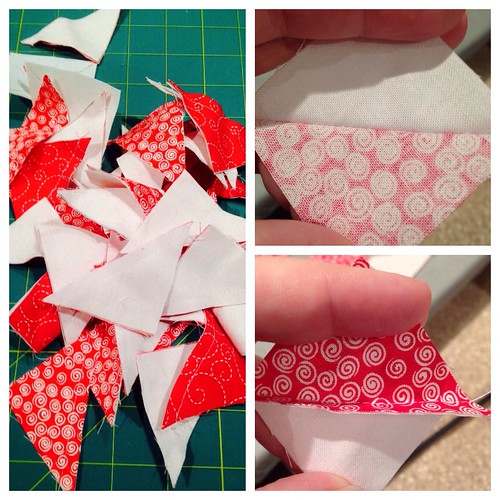 Sigh.  Into the garbage they went.

Then there was the little problem I had with reading the directions completely first.  (This is an on-going problem I have.) It said to cut the white square 7.5″ (which I did), and then it said to cut it down to 6.5″, but I didn’t read that step and couldn’t figure out why things were out of proportion. So…I cut my white squares down to 6.5″ (after I had appliquéd his hat and eyes on), but one of them I cut down from the back and proceeded to sew that side on without looking and guess what happened…. 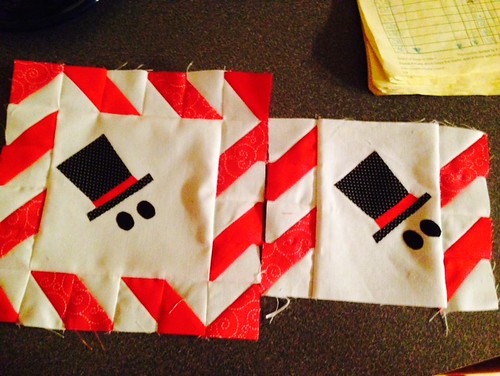 So I ripped some more.  Sigh.  And had to cut out another top hat and set of eyes.  Sigh.  And do more appliqué.  Big Sigh!

But I persevered. I re-did (for a third time), and got them finished… 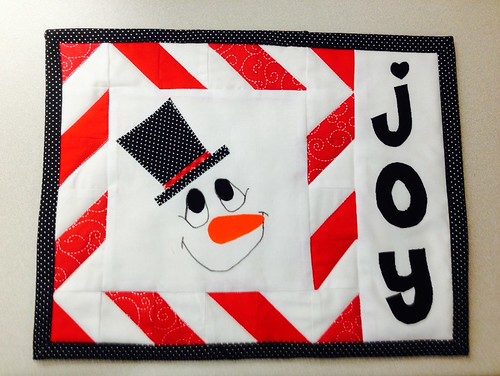 And here they are, in their respective new homes… 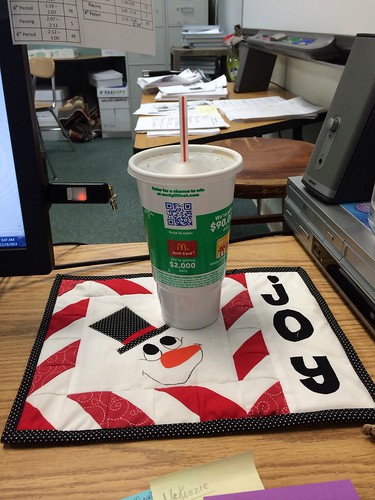 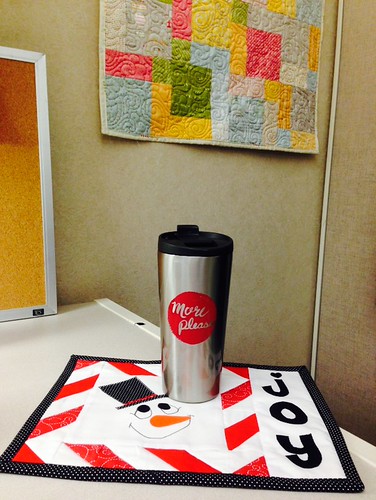 Turns out my ‘More Please’ mug was supposed to be a Christmas present.  I guess that wasn’t clear to me, considering this was the 2nd or 3rd time I had used it!  OOPS!

PS – Bonus points if you know why I named them both Jack.  Gretchen, you don’t get to play!

I'm a wife, mom of two (one blue, one pink), and I work full time. Our family loves to camp, and we're often on mini adventures during the summer. My fall/winter/spring/rainy day hobby is quilting. I started about 10 years ago, then put everything away when The Blue One was born. A few years ago a good friend decided to take up this 'hobby' and I've been back at it ever since. She's my partner in crime (A.K.A. 'the enabler'). I have no aspirations of becoming a quilt designer - I'm just not that good at geometry (I rely on my math major/computer programmer husband to help with piecing backs at times!). This little blog is my way of chronicling my quilting adventures. Occasionally I post about non-quilting things as well. Thanks for stopping by. Don't forget to say HI! IG: wannabequilter
View all posts by msminnesota →
This entry was posted in Other Fun Stuff and tagged just jack, My Pieced Life, snowman mug rug. Bookmark the permalink.