I had to run in to the LQS yesterday to pick up a new needle threader for my machine because mine broke off while I was doing some practice FMQ earlier in the week (things got a little crazy!).  While I was there I decided to check to see if they had gotten in any more off-white minky as I knew Gretchen was in need of some for a backing or two, and I had a great coupon in my pocket (buy 9 yards, get 6 free!).  I had been in the shop the week before and was having a hard time finding 15 yards, but they had gotten a shipment and had the off-white that she needed as well as raspberry that both she & I could use.

After figuring that she needed 4 off-white, 4 raspberry, and I was getting 3 of the raspberry, I was quickly closing the gap on the needed 15 yards to use the coupon.  They have a selection of 108″ fabric for backs, so I picked up red with white circles for my B&W Log Cabin that I started working on last week. I was going to go with a red solid for the back, but this is more fun. 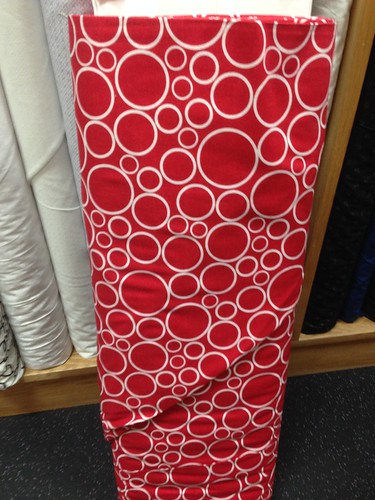 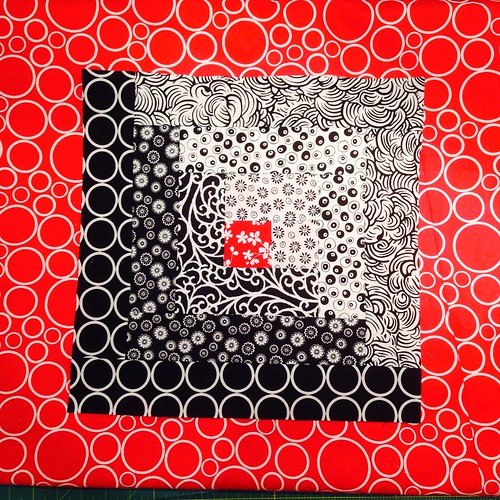 It adds to the craziness, and I’m OK with it. I’m adding a solid black border, so it will be ‘contained’.  🙂

In my last post I wasn’t so sure I was digging these blocks (when I had 2 completed), but I whipped out 5 more and tossed some up on the wall and I’m feeling much better about them. 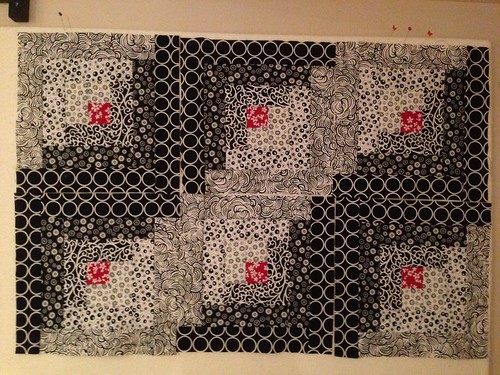 This is not the final layout, but I it helps show that my concerns in my last post were unnecessary.  It’s going to look pretty damn cool when it’s done.
I also bought a yard of Wee Wander Summer Night Lights in Magenta (the bottom fabric) because I’m planning to make this, or something similar. 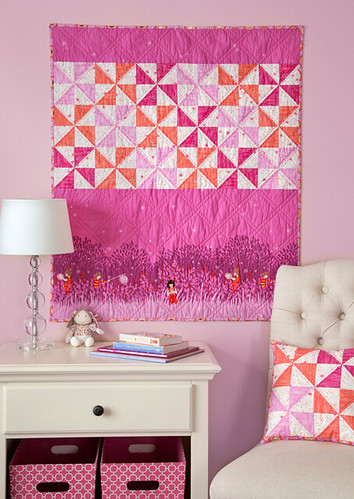 The tutorial can be found here.

I was JUST going to pick up my part, and ended up spending over $200 on fabric…Whoops!  In my defense, when it was all said and done, we saved about 40% by using the coupon, and that’s darn good savings on things we ‘need’ anyway!

I'm a wife, mom of two (one blue, one pink), and I work full time. Our family loves to camp, and we're often on mini adventures during the summer. My fall/winter/spring/rainy day hobby is quilting. I started about 10 years ago, then put everything away when The Blue One was born. A few years ago a good friend decided to take up this 'hobby' and I've been back at it ever since. She's my partner in crime (A.K.A. 'the enabler'). I have no aspirations of becoming a quilt designer - I'm just not that good at geometry (I rely on my math major/computer programmer husband to help with piecing backs at times!). This little blog is my way of chronicling my quilting adventures. Occasionally I post about non-quilting things as well. Thanks for stopping by. Don't forget to say HI! IG: wannabequilter
View all posts by msminnesota →
This entry was posted in Quilts and tagged Log Cabin Quilt, Sarah Jane Studios, Sunday Stash, Wee Wander. Bookmark the permalink.

6 Responses to The Unplanned Purchases