Happy Super Lazy Sunday!
At least that’s how it has been at my house today.  Some early spring snow is falling, kids are watching movies, then playing with friends, and I was able to get some sewing done.

I actually started sewing yesterday. It was National Quilting Day, after all….what better way to spend it?

I whipped up a super quick mug rug using my leftover Twice as Nice by Riley Blake. 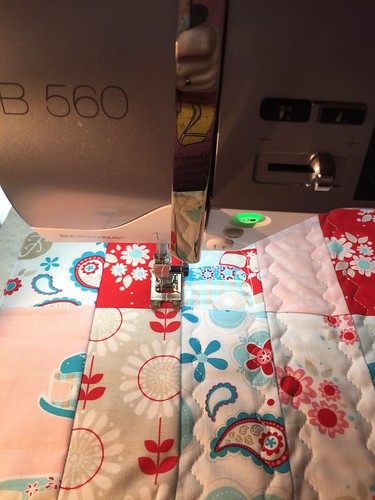 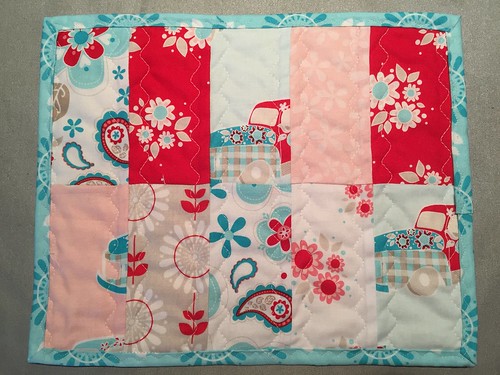 After that I started working on my bee blocks for the Promises Circle at do. Good Stitches. Our March leader is Meghan and she had us doing Exploding Blocks from a tutorial at Missouri Star Quilt Co. It’s a funky block and goes together super quick, but I had a really hard time with the second-to-last piece of fabric I added per block. It was so much smaller to the block I was adding it to, and that caused puckering and just overall badness, so I ripped them apart and re-cut the final two pieces to the right size as I needed them.  I finished them this morning and in the end, they turned out ok.  (Yes, jut ‘ok’.) They’re far from square due to the fact that you have to cut them with scissors by hand, and I’m hoping they work for Meghan (fingers crossed).

Not fantastic lighting, but here they are: 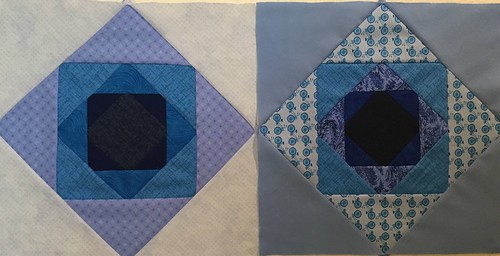 After I finished these I was contemplating starting a baby quilt for a baby that’s due next month but I couldn’t bring myself to press and cut any more, so I decided to bind the Mystery Quilt I made at the retreat last year that I finally quilted in January.

I fought with this dang thing for over an hour while I was binding it. I somehow managed to mis-cut the binding when I was about to join it and I ended up having to jerry-rig it to finish it.  Not one of my better efforts, I must say. 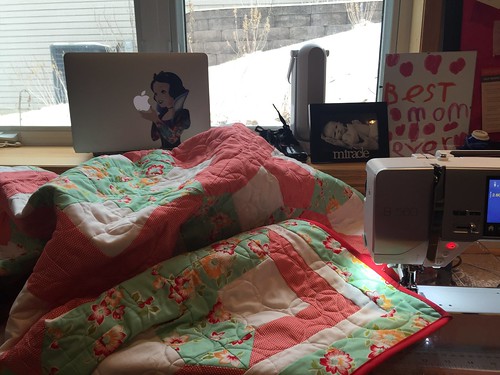 But the dog doesn’t mind… 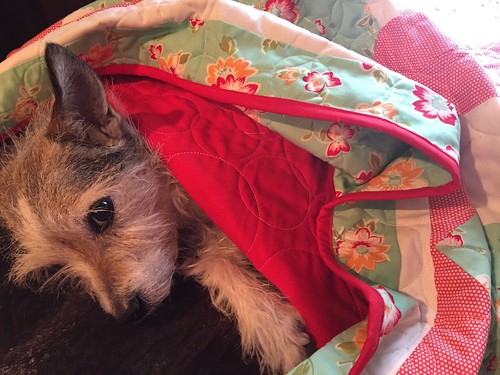 So there you have it folks, finish #2 for the year. I’ve now officially tied my total number of finishes for 2014 and it’s only March.  Not bad, eh?

And now for my Sunday Stash –
I went to the LQS to pick up some yellow for a mug rug and some blue for the bee blocks and left with a little more than I went in for. In my defense, they were having a sale…buy 2 pre-cuts, get 1 free.  So I walked out of there with two bundles of 7 Seed Company fat quarters and one bundle of 12 Blast Off fat quarters and some binding yardage (along with the blue for my bee block that I FORGOT to use and some yellow I haven’t used yet).  I swear, those ladies at Sweetwater are going to bankrupt me!  Love the trucks! 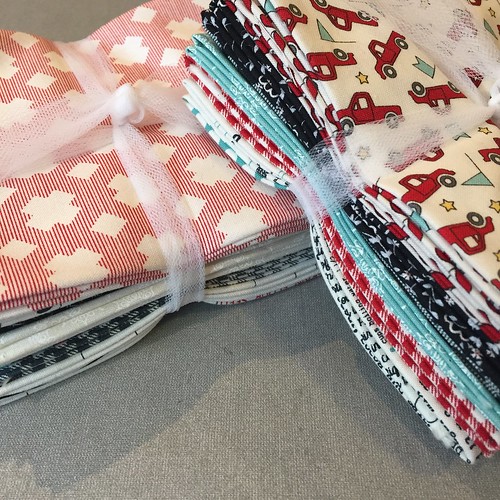 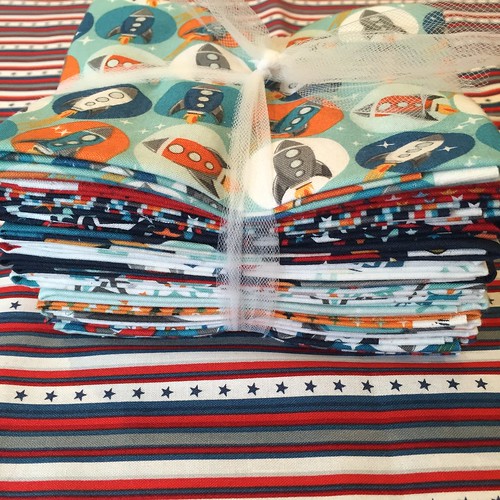 I already have backing yardage for Blast Off, but no idea what I’ll do for the top. I’m hoping the April baby we’re waiting for is a girl so I don’t have to figure this one out right away!

Holy cow, what a busy sewing weekend I had! Linking up to Molli again today.

I'm a wife, mom of two (one blue, one pink), and I work full time. Our family loves to camp, and we're often on mini adventures during the summer. My fall/winter/spring/rainy day hobby is quilting. I started about 10 years ago, then put everything away when The Blue One was born. A few years ago a good friend decided to take up this 'hobby' and I've been back at it ever since. She's my partner in crime (A.K.A. 'the enabler'). I have no aspirations of becoming a quilt designer - I'm just not that good at geometry (I rely on my math major/computer programmer husband to help with piecing backs at times!). This little blog is my way of chronicling my quilting adventures. Occasionally I post about non-quilting things as well. Thanks for stopping by. Don't forget to say HI! IG: wannabequilter
View all posts by msminnesota →
This entry was posted in Other Fun Stuff, Quilts and tagged mug rug, mystery quilt, Twice as Nice. Bookmark the permalink.